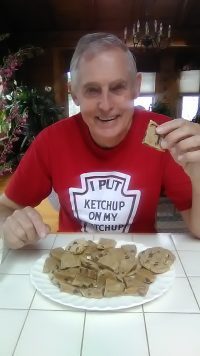 I hope you enjoy our monthly list of events, organizations or people to celebrate or follow. A few are funny, all are interesting and some are serious.   Also, each month we will publish informative dessert or main meal recipes and reviews. Some times we will write about an ingredient we use, where it is made or grown, how it is harvested or even the ancient or modern history behind it.  Whenever we learn of a modern-day chocolate convention, a big-time international business trade show or an interesting brand new dessert product in the grocery stores we will report it right here.  So we hope you return each month for a look-see!

May 2021 Special Days and Events

Recipes
Send us your favorite family recipe so we can test it and post it on this page! Send
your recipe to info@pfudge.com along with a photo of who invented it!

Steve's notes:
1. The original recipe called for Duncan Hines brand but you can use other brands instead.
2. I have two recipes and while one indicates 3 teaspoons of vanilla the other indicates 3 tablespoons. Hmmmm! So, I suggest using 1.5 tablespoons)

“These vegan sweet potato-black bean burgers spiced with curry powder are easy to make. Blending the mixture with your hands gives you a soft, uniform texture then the outside gets crispy by cooking in a cast-iron pan. To make this recipe gluten-free too, use gluten-free oats and serve the patty in a lettuce wrap, omitting the bun.” Steve’s notes: If you top it off with ketchup these burgers will taste spectacular!

Step 1 – Squeeze grated sweet potato with paper towels to remove excess moisture; place in a large bowl. Pulse oats in a food processor until finely ground; add to the bowl with the sweet potatoes. Add beans, scallions, mayonnaise, tomato paste, curry powder and salt to the bowl; mash the mixture together with your hands. Shape into four 1/2-inch-thick patties. Place the patties on a plate; refrigerate for 30 minutes.
Step 2 – Stir yogurt, dill and lemon juice together in a small bowl; set aside.
Step 3 – Heat oil in a large cast-iron skillet over medium-high heat. Add the patties; cook until golden brown, about 3 minutes per side.
Step 4 – Divide the yogurt sauce evenly among top and bottom bun halves. Top each bottom bun half with a burger and cucumber slices; replace top bun halves.
© Copyright 2020 eatingwell.com. All rights reserved. This recipe was found by our daughter, Kristen, at http://www.eatingwell.com/recipe/278513/sweet-potato-black-bean-burgers

Ingredients:
16 oz of cooked broccoli florets
1 can of cream-of-celery soup
2/3 cup of milk
1/2 cup of shredded cheddar cheese
1 “large” can of Durkees or Frenchs fried onions

Directions:
In a 9×12 baking dish layer the broccoli down first then a layer of  1/2 can of onions and top with a layer of the thoroughly mixed soup, cheese and milk.
Bake for 25 minutes at 350 degrees (F).
Top with remaining onions and bake for an additional 5 minutes.

In the morning, add 1 teaspoon salt, cover pot and simmer until tender (about 1/2 hour) and scoop off foam. Remove from heat, add 1/2 teaspoon baking soda and scoop off foam again.  (The farts are in the foam). Let stand a few minutes then drain.

Steve’s notes: If you like the beans firm a half-hour in the pot is fine. if you like them softer boil them for no longer than 1.5 hours. Even if you don’t like beans you will love the smell. I really like baked beans and this is the best recipe I have ever tried. Gina and her husband Mahlon, used to operate the Fort Ticonderoga Ferry in Shoreham, VT. They have since moved to Florida but come back to visit now and then. They lived in a 250 year-old stone house right on Lake Champlain and had a small, but fun, country store at the landing. We miss them but look forward to the next time we get together over a pot of Gina’s baked beans. Thank you Gina and Mahlon – and say “Hi” to Captain!

There are about 400 DoubleTree Hotels by Hilton located in 40 countries. No matter which one you stay in they all have the same cookie available for free at check-in: The famous Doubletree Chocolate Chip cookie. In fact, it is so famous it was said to have been the first food ever baked on a space flight. In late April 2020 the hotel chain decided to divulge the recipe. We give a five-star rating for the cookie and another five-stars to DoubleTree for unveiling the secret recipe.  Thanks DoubleTree!

We found a great recipe from our friends at Sally’s Baking Addiction. The dough needs to be refrigerated for a few hours so it is easy to handle and spreads less in the oven.  We picked this recipe because it is close to our May Flavor-of-the-Month fudge, Chocolate Caramel Cookie. Sally has thousands of recipes, cookbooks and offers free dessert recipes every week. It’s a lot of fun and worth a visit. 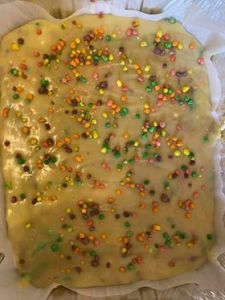 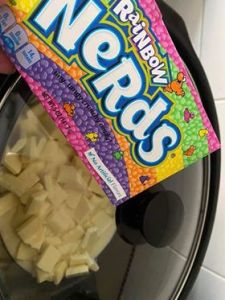 Photo by Melissa on delish.com

Have your kids opened their lunchbox to see fudge, with Nerd’s on top? Providing them with such a kid-loving, appetizing dessert, my kids would wonder what they did right.  Whether  a dessert for good behavior, or a dessert to satisfy the sweet tooth, surely this recipe will be a gift. If you’re a parent whose learned bribery works well, you’ll want to store this recipe for safekeeping. Especially for those on a time-limit, you will be happy to know this can be cooked in a crock-pot. Taken from Melissa at delish.com, be sure to have your Rainbow Nerds handy:

500g. milky bar chocolate
1x 395g Tin sweetened condensed milk
1x Tbl spoon of butter
Box of Nerds
Cook everything but the Nerds with the lid off for 1.5 hrs. on low & stir on & off
Add Nerds and mix.
Put in Tray to cool in fridge.